Hi all new to forum and makeblock in general,

Recently I bought a Mbot and I’ve been trying out some of the features and standard functions and it works quite nice. But now I want to drive it using my keyboard and here something strange happens. I watched some youtube videos for inspiration and how to make nice automatic turns but when I went to Mblock5 a lot of the events and robot controls were missing??? For instance Mblock 5 only has the “When space key pressed” event and the “When space key released” is not there? Am I doing something wrong or should I download something extra?

The videos I watched were also of older versions of Mblock so I tried downloading these and there they do appear and work. I also tried saving my project in V3.4.12 and opening it in V5.3.0. But when I do in V5 it just shows the “when space key pressed”.

So my question is: Is this supposed to be this way?
If yes: Why? Why delete features in newer versions of the software?

You are perfectly right. The “When space key released” would be a really super facilitating event. In mBlock 5, I use the remote control and press once in the desired direction. I think holding the button would be good with young people.

Here is a code that is not too good, but it works a little. Note : It lacks a bit of responsiveness

Hello, please click the extension and search “scratch”, then add the “mBlock 3 blocks”. Then you will see the blocks that you mentioned above. Thank you very much!

It’s too easy and thanks for the solution.

You need to download a copy of my book ‘mBot & Me’ from the following link: 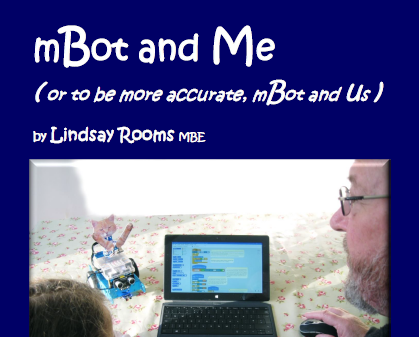 mBot and Me (or to be accurate, mBot and Us) - Makeblock Education

You should find this a really useful guide to mBot & mBlock 5.

Thx for all the replies. I already came across your book, looks very nice!

But I already moved on from mBlock because it isn’t suitable for the things I wanna do. It was nice for getting to know the robot a little and as introduction to arduino programming.

Right now I connected a NodeMcu v3 ESP8266 to the mBot and use a Python script to send serial commands.

Also built a Discord bot to control the mBot. I will upload this code probably somewhere this week for who is interested.

Next step is implementing localization, orientation and navigation via a ceiling mounted camera.